Whether you’re pining for Medieval sustenance, nostalgic about dance moves of yore, or want a Thanksgiving feast that doesn’t require a whole bird, these smoked turkey legs are for you.

Paula: Have you heard about the turkey industry woes? They’re taking a hit because people are hosting smaller holiday gatherings this year (and might not need a whole bird), and leg sales are down because Renaissance Faires have been cancelled. There are a lot of disgruntled Lords and Ladies out there.

Scott: You can count me among them! That reminds me, I was the turkey leg juggler at the Middlefaire Renaissance Festival in Hillsboro during high school. That’s where I got the nickname Smoked Turkey Legs Moody. Well, that and a special dance move I’m known for. I think I still have my muffin hat somewhere.

Paula: You’re an eternal fountain of surprises. How much beer would be required for you to revisit that “special” dance move (I’m asking for a friend). In the meantime, I’m doing my best to revive drumstick sales. My sword-wielding son has been requesting this meaty pleasure of yore, so I finally granted his wishes. The following combo of dry brine plus tangy mop sauce (they meld with sizzling fresh herb sprigs and pan juices to create a deeply flavorful basting liquid) results in meat so tasty and tender that I’ve been given permanent residency in the kingdom! And, now I have bones for turkey gumbo, so it’s a win win

Scott: That mop sauce is quite something. This recipe is sneaky because it seems so simple and unadorned, but I predict it’s going to be one of our more popular recipes, even beyond the Renaissance Faire crowd.

Paula: I’ll show you unadorned (throws tomato, runs away with a goblet of wine and wreath of flowers in hair). 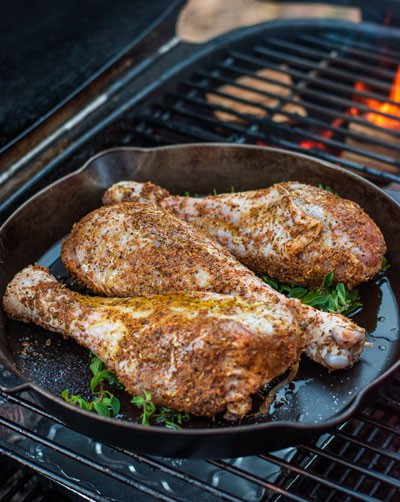 You’ll have enough mop sauce for an additional leg, if you want to add more fun to the skillet (just add additional seasoning as needed). It’s not essential to smoke the legs on a bed of fresh herbs, but the sizzling sprigs perfume the meat and basting juices with incredible flavor. Back Porch Burger Blend (a friend to all patties) infuses turkey burgers with deliciously down-home, herbaceous flavor. Combined with provo... Two ingredients–plus time and a wood-infused fire–are all you need to smoke this show-stealing shoulder to juicy perfection. Tart cherry po... When was the last time you had a good old-fashioned baked potato, loaded with all your favorite toppings? May we suggest you revisit this m... This recipe is all about the Holy Trinity of sweet, smoky, and spicy. Sweet Preacher seasoning infuses the pork with the satisfying flavor ... Why wait for the big game? The spicy, creamy, and salty confluence of crispy chicken wings, tangy buffalo sauce, and blue cheese is hard to...